It’s already coming to the end of Jan 2015 so I thought I probably write part 2 of my 2014 investing and trading review before we get too far into the year. 🙂

For those who have not read part 1 which talks about some of my investments in 2014,  you can find it here:

I will now go on to part 2 will talk about my experiences with futures and forex in 2014.

I currently trade only one type of futures contract – SIMSCI, which tracks the MSCI Singapore index.

One SIMSCI futures contract gives a market exposure of $200 per point, which is about $76,000 based on the current value of 380.

I use SIMSCI when I want to take a short position on the market, as it is one of the most cost effective way of shorting the market. The charges are probably 10% or less compared to using CFDs. For more information on that, you can refer to one of my earlier article:

There is also no financing costs.

For 2014, I was using SIMSCI futures mainly as a partial hedge to my other long positions in the market.

Sometimes, I used the support and resistance lines to determine my entry and exits, but since this is meant as a hedge, most of the time I will just hold the position long-term. 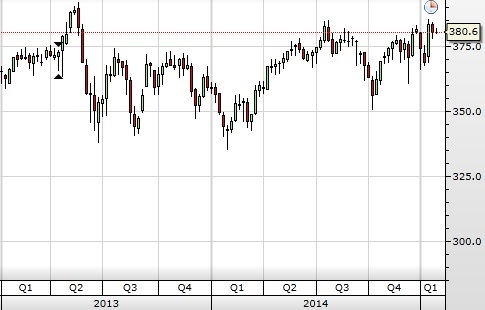 January went well, with a profit of around $4000 due to a correction in the market. The rest of the year wasn’t so good, as the market recovered and finished the year higher than it started.

I managed to avoid the Feb – March rebound, but the April to Dec run-up wiped out my January profits.

Furthermore, as I was trying to take on additional short positions during the roll-overs (which did not work out most months), I ended up making some additional losses.

Overall, my loss due to SIMSCI in 2014 was around $2,000. I treat it as the cost of hedging, which is not so bad as I would have been protected if there was a major correction in the market.

I continue to hold a short position in SIMSCI going into 2015.

I had positions in two currency pairs in 2014 – the AUD/SGD and EUR/USD.

I consider myself as a position trader, as my positions are held for the long term. I find day trading too tiring – staring at a screen whole day long waiting for a technical signal is simply no fun at all.

In forex trading, the leverage is very high, and you definitely do not want to hold a position that is beyond your comfort level. One thing I found out is that if a position is big enough to bother you, you tend to make all kinds of silly decisions like taking profits or cutting losses too early/late.

This often leads to disastrous outcomes.

Therefore, I tend to trade positions of 50,000. This is a position that I’m comfortable with to have long term positions without becoming irrational.

I don’t even login to the trading platform much to see the running profits or losses, perhaps just once every one to two months. However, I do monitor the market prices regularly on my phone.

Each position I trade will also be backed by at least $10,000 of equity, so as to avoid excessive leverage.

Now, a bit more on my two currency pairs.

This is one of my frequently traded currency pair for various reasons.

AUD/SGD tends to trade in a range, although once in a while, it does break into a long trend which can be very brutal if you are caught on the wrong side of it.

I hold some other investments denominated in Aussie dollars, so sometimes I use this pair to hedge the Australian currency if I find it to be trading quite high in its trading range.

However, as you need to pay interest costs if you short the AUD, it can be costly to hedge the currency for an extended period of time. 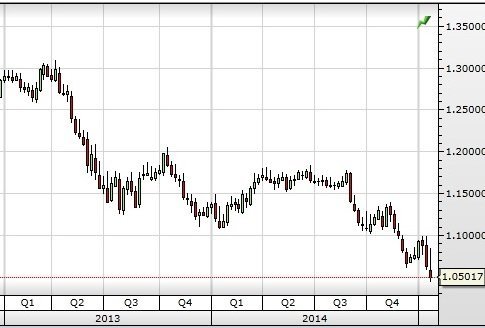 Last year, I had only two trades in it, both on the long side.

I initiated a long position in Jan 2014 at 1.12. The strategy was to simply hold it long term and earn the interest. This is also known as the carry trade.

The price actually went up all the way to 1.18 (profit of S$3k). I did not sell as this was meant to be a long term carry trade strategy.

However, the price subsequently clashed below my entry point and I temporarily closed my position in early November at 1.1275 off a rebound . The interest earned meant that my purchase price went down to 1.103 with a profit of around S$1200.

I re-entered the position again in late November at 1.11 with the intention of resuming the carry trade. On hindsight, the re-entry was a bit too early as the downtrend was still very much intact.

The position was down around S$1500 at year end, resulting in an overall loss of S$300 for AUD/SGD for 2014 after I factor in the earlier profit.

Not exactly a happy outcome coming from a very profitable position in the middle of 2014 but oh well, you can’t win everything.

This currency pair was my big winner for 2014. 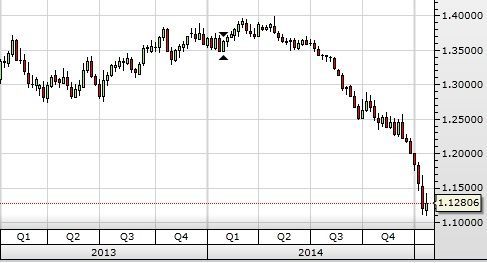 This is a kind of no-brainer fundamental trade. With the US ending quantitative easing and on the verge of hiking interest rates but the Euro going into monetary easing, the Euro is bound to depreciate against the US dollar.

The problem with fundamental trades is that you can get the theory correct but the timing wrong. There are also counter-trend movements along the way which might cause you to be closed out from the trade and lose money.

So if you try to trade this short term or with too high a leverage, it might not work out. There is also a risk of being played out by the central banks.

I was actually too early in my trade but because I committed only a small initial position, I was able to hold it despite the early rally and then ride the downtrend all the way till today.

Also, if you miss the initial move in this kind of trade, it can be difficult to overcome your emotions to enter the trade.

Take one example – the USD/JPY, another seemingly no brainer trade with a similar investment thesis as the EUR/USD.

Having targeted to long the USD/JPY  but missed doing so a couple of years back, I find it psychologically impossible to enter the trade with the price having moved from 75 to 120 in the space of two years.

One thing you quickly learn about the market is that there are endless number of opportunities popping up from time to time. It’s fine to miss one; you just need to find and make a few good trades.