Is There Demand for Smaller HDB Flats?

There was this article Cool Response to Smaller HDB Flats which stated that demand for smaller HDB flats is not as strong as expected. 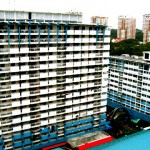 The numbers from HDB show the application rates for smaller flat types ranged from about 40 per cent to three times the number of flats offered – less than the typical four to five times seen for four- and five-room units.

The article prompted a response from Leong Sze Hian, which was only published in the online version of Strait’s Times forum and not in the print version.

Mr Leong explained that the lower demand could be due to the household income cap of $2000 and $3000 for 2 and 3-room flats respectively.

He also questioned HDB’s argument that HDB flats are generally affordable as most people spend no more than 30% of their income to service their mortgage. Mr Leong pointed out that this argument is fundamentally flawed as it failed to take into account those who could not afford HDB flats because buying one would leave them with too huge a loan to service (more than 30% of income). Or those who give up their flats because they couldn’t service the loans.

If the people who own landed property spent only 30% of their annual income on their property, does that mean that landed properties are affordable?

A better indicator of affordability could be median and lower incomes as a multiple to HDB prices. Generally, the income levels have been lagging behind the rise in HDB prices.

As of September 2009, 30770 HDB loans were in arrears of over three months. This is 7% of the total number of HDB loans.The default rates for HDB bank loans are not available.