If you have not read that article, please go and read it first before reading the rest of this article. Some of you might be surprised at these increases if you have not been tracking updates on Medishield. I have been tracking this topic and these changes were actually covered in two of my previous articles:

Even though there were some minor enhancement to the benefits, the premiums increase within a space of just five years has been huge. 🙁

People should not worry about how high premiums will rise, but focus on whether they will remain affordable.

That last sentence is a giveaway that the increase will be significant.

Some of you might have the impression that the increase will be no more than 3% from current levels.

“Premiums will go up. The exact amounts have not been revealed – they will be finalised by the committee over the next month – but the increases for most policyholders should be no more than 3 per cent from current premiums, the committee said.“

This statement is partially correct and misleading.

Recall from my earlier article that the premium increase consists of two parts. One part is due to the enhancement of benefits,  the other portion is due to the implementation of universal coverage.

Let us now look at some of the indicative figures for Medishield Life premiums that have been given to us. Please note that the figures have not been confirmed and is still subject to change. 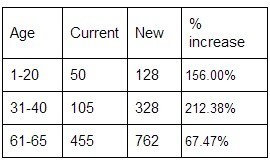 The increase is staggering! Whether the enhanced benefits justifies the increase is debatable and is a topic for discussion which I will talk about briefly in my next post in the Medishield Life series.


Before we throw our hands in dismay, the government has announced a series of measures to mitigate this increase of premiums:

Some of them are definitely helpful but not all people will benefit from the measures. For example, the self-employed middle aged individual.

I also don’t like transitional premium subsidies as they are always there to make the numbers look good temporarily. You will notice that when they compare figures, they always like to compare the “before” figure with the “after but with transitional subsidy” figure.

At the end of the day, any increase in premiums is permanent but transitional subsidies are only temporary.

Will the Medishield Life premiums really be affordable for us after taking into account all the subsidies? I guess we will have to wait until the full details are out before we can answer that question for ourselves.

What about those who have their own private integrated shield plan? Should they keep it or is Medishield Life sufficient for their needs?

If you are one of those who are planning to cancel your integrated shield plan like what this expert thinks, please hear me out first before doing anything.

My next post in the Medishield Life series will cover the history of the integrated shield plans, some common misconceptions and the future ahead for the shield plans.

1) Can a patient choose to stay in B2 or C ward of a government hospital despite he can afford to stay in A ward of a private hospital?
2) MediShield Life will be applicable for all including newborns and school children. Who will be paying their premiums?

1) Yes. Percentage of subsidy is subject to means-testing. Check MOH website for the discount table.

Govt is trying to limit the price increase for those 65 & older. Logically speaking this makes no sense, as people incur most of their health costs (up to 90% of lifetime medical costs) when they are above 65. By logic, those above 65 should have the largest price increase as they will be the ones to consume the most healthcare services & medical products.

In other words, govt is implementing an inter-generational transfer. They are targeting those in the peak-earning years (31-50) to help subsidise those elderly.

As for private Shield plans, the insurance companies will increase their prices by 2X – 3X. The lower plans (B1 & B2 wards) will have the biggest price increase as Medishield Life changes affect these lower plans much more than those plans for private hospitals. This is ironic as customers who buy B1 ward plans are those who are cash-strapped in the 1st place and cannot afford those plans for A-class wards or Mt Elizabeth Hospital or Raffles Hospital.

To cope with medishield life, I guess many would have to drop their IP so that the annual premiums can be paid using medisave without coughing up fhard cash.
Now looking at your figures, this seems the way to go. Why medical expenses have risen so many folds to justify the hikes in annual premiums?