The housing figures that were released by URA and HDB for the third quarter of 2012 showed that Singapore property prices were still going up.

There is no simple answer to this but let’s take a look at the demand and supply side of the equation.

We have no shortage of supply.

If you add up the supply for the three years, it totals more than 120,000 units.

Looking at recent private property launches, my gut feel is that the property developers are still able to price their unit at a level they want and sell their units. Which means to say the demand side is still pretty healthy (for now).

There are a few reasons for this:

This stimulates demand for property in two ways.

The first reason is that it is easier for an investor to get a rental yield that is higher than his cost of mortgage. That means he does not need to fork out any money to pay the mortgage installments. Furthermore, he can choose to pay his mortgage using his CPF and collect the rental in cash. A nice way of withdrawing money from CPF.

The second reason is that there is a lack of suitable alternatives for cash. Rather than leaving cash in the bank earning practically 0%, some people who don’t invest (in financial assets) end up saving their cash and use it for a property purchase.

Shortage of Supply of HDB

As HDB BTO units take time before they are completed, a family needing a roof over their head now will be forced to pay a premium (what we commonly call the COV) in the resale market.

Compounding the problem was that insufficient BTO units were launched in previous years.

There is a history to how the present BTO system came about, but I shall not go into that here.

Here is a graph showing how the resident population has been increasing through the years. 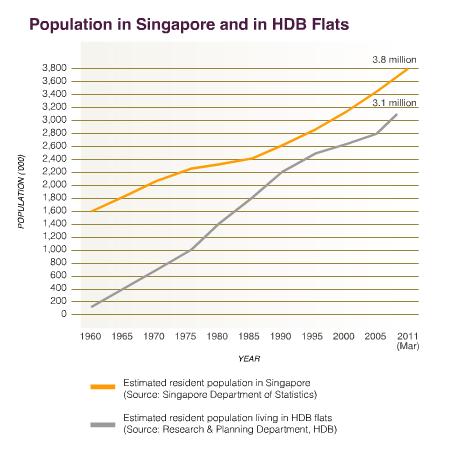 The number has been on a relentless uptrend despite our low fertility rate. This is due to our liberal immigration policy.

These two articles on our population and foreign workers were recently published:

Foreign workers up in Singapore despite tightening (Yahoo Finance)

Singapore population up by 2.5% (The New Paper)

When I saw this number, I finally realize why our new supply never seems to be enough.

We have not even cleared the demand backlog of the existing population and yet we have to cater housing for another 100,000 people every year.

While some of these people might be staying in foreign worker dormitories, a significant number would need to find a place to rent. This takes supply out of the market and encourages property investors to hold multiple properties (since it is easy to find tenants).

So can this situation go on forever?

The pace of our population growth has to slow down at some point. As it is, our infrastructure (most notably transport) is already feeling the strain. The infrastructure will have to play “catch-up” otherwise things will get really uncomfortable.

And of course, when interest rates finally normalize (I say when and not if), those people who are over-geared will see their house of cards collapsing.

For now, I expect to see the government continue to fight the property price increase.

Our population influx will stop when the PAP realise that the silent majority, i.e. the 60% who voted for them, some of those are actually really angry with them now.
The PAP have this silly notion that every single voter, even those who did not vote for them actually want them, love them, and want a PAP govt until the end of time.
We are not in Europe, we are surrounded by countries, whose people dont like us very much. Just need a spark.
If this “perfect storm” in Europe, China and US does come to pass, god help those who are forced to buy now.