Recently, there has been an email impersonation scam involving the Singapore Police Force.

How the scam works is that scammers will send emails from the email address [email protected] to various recipients.

In the email, a fake officer claiming to be from the Commercial Affairs Department (CAD) will inform the recipient that he has committed financial fraud and needs to respond to the email within 48 hours.

The police advised that anyone receiving such emails should ignore them and not click on or try to open any attachments to such mail.

They should also not transfer money, or give out their particulars or bank account details to strangers. 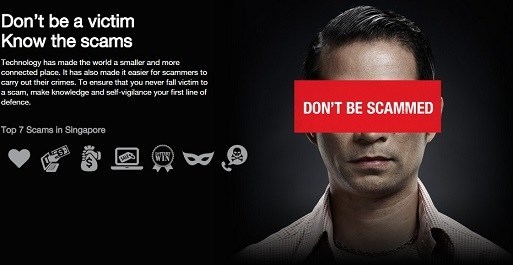 According to NCPC, the seven top scams in Singapore are:

Victims, searching for love or friendship online, will be fooled into a relationship (usually by a foreigner) and asked to send money over.

Overseas based female scammers will trick male victims into performing indecent acts in front of their webcam and use it to extort money.

After gaining the victim’s trust, the victim will be asked to open a bank account (or use his existing ones) and use it to receive money. They will then be told to remit it to another party.

Popular products will be sold at low prices. The products don’t get delivered and the victim will be asked to make top-ups for all kinds of reasons.

The victim will be told that he has won a lottery but need to send some money over in order to receive his prize money.

Scammers hack into someone’s email or facebook account and send messages to the victim’s friends asking for monetary help.

For the phone version, they will pretend to be some government officer and ask for money.

Victims receive phone calls claiming that their next-of-kin has been kidnapped and are asked to pay a ransom.

Stay vigilant and warn your friends about these scams!

Lessons We Can Learn from the Sim Lim Square Incident

Do u have any comment on the high interest offered for deposits by this company. Have u hesrd of them? Are they able to take deposits from publuc here in singapore when they are not banks or finance companies ?

The domain name was only registered on 17-Dec-2014. I think it would be very risky to put any money with them.

Think you forgot to include another scam about foreigners from China and Myanmar who pretend and dress like monks sitting outside temple or going door to door asking for “alms”, some of thse fake monks can get up several hundreds or few thousand dollars in a matter of hours.

Thanks for highlighting. Those are a different type of scam, cheating small amounts from many people. They are rarely flagged by the police.