The Ultimate Banker by Edwin Lim

The Ultimate Banker book, written by Edwin Lim and co-authored by Leong Kaiwen and Edward Choi, was one of the many books that I purchased from Prologue at Ion the other day. 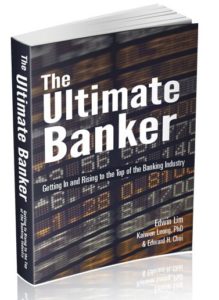 As some of you might know, Prologue at Ion would be closing down on 25 August 2013. Being an avid reader and collector of books, I was sad but that did not stop me from going down to buy some books in their closing down sale.

Out of the books that I bought, The Ultimate Banker was the first one that I read. It was a book that was meant to show you how to compete and excel in the banking industry. Unlike many other books, The Ultimate Banker was written by a banker who had more than 23 years of banking experience and had risen through the ranks to become COO of a bank in just six short years.

Usually, someone who had become a successful banker would be unwilling to share all his secrets with the public, nor he would have the time to write a book to do so. So why did Edwin do it? The answer slowly became evident after I read the first few pages of the book, where the author revealed his reason:

At this point of time, I have realized that money, fame and status are not that important after all. I started with nothing and pursued what others pursued – a career, fat bank account, properties, status and recognition. Once you’ve been there and done that, you feel happy for a while but the joy fades with time and your realize that it is empty.

It reminded me of the story of Dr Richard Teo, who had came to a similar realization. And when I turned to the next page of the book, the real reason struck me hard:

When I got diagnosed with ALS, a terminal motor neuron disease, I realized that no amount of money or status could restore my health. I was given two years to live.

ALS is a terrible illness characterized by rapidly progressive weakness. The weakness might first start in your limbs and progresses until you have no strength to stand and even sit up. Eventually, you do not even have the strength to breath and will die. It has no known cure.

By writing a book, Edwin hoped to leave behind a legacy, a gift to society and his children. As a result of his work, he was also featured on the Straits Time early this year.

The book is divided into four sections.

The first section teaches you general concepts on how to get a job at a bank and what you should do to get promoted. Edwin even provides some tips on how to avoid being retrenched.

For undergraduates, it is important to start planning for it, and start doing the relevant internships early. Be prepared to do a thorough research to understand the different functions of a bank, and know what you want so that you do not look like a fool at the interview. Otherwise, you will be eliminated within the first few minutes. Having a high IQ is insufficient as many people who go for the interview sessions also have a high IQ. EQ and knowing how to play your cards is just as important.

If you think that just by reading the Wall Street Journal or Financial Times about events you do not truly understand with terms you do not truly know, or joining the finance or investment club while playing online stock trading games, that you are going to make it as a banker, then you are dreaming as it is just one minute part of the puzzle.

The other three sections of the book covers in more details the different divisions of a bank – investment banking, wealth management and treasury, and provides specifics on the skill sets that are needed.

For wealth management, it reveals what most of us already know. Looks are important (with all other things being equal) and a bank will usually try to match a client with a banker of the opposite sex.

Throughout the book, Edwin shares real life experiences to reinforce what he teaches. This serves as a good eye opener.

Overall, I find the it good value for money and would recommend it to anyone who is interested to consider banking as a career option. However, be warned that while the money is good, the hours can be very long and the stress levels very high.

The Greatest Trade Ever

The Big Short by Michael Lewis