In 2010, our headline Consumer Price Index (CPI) inflation averaged 2.8% for the whole year.

Rather than the CPI, MAS uses the MAS Core Inflation measure as an input in the formulation of monetary policy. This measure is supposed to reflect persistent rather than temporary price movements. Designed to be less volatile, it is a more practical parameter for policymakers to use.

One of the ways of determining such a parameter is to use an exclusion-based measure. This usually excludes prices of items which are volatile and largely determined by supply disturbances (usually food and energy), or influenced by changes in administrative polices.

In Singapore’s context, food and energy is not excluded as we have a high degree of reliance in imported food and energy products. Instead, the costs of accommodation and private road transport is excluded from the CPI to determine the core inflation as these two inputs are hugely influenced by government policies.

The MAS Core Inflation averaged 1.5% for 2010, which is much lower than the CPI. 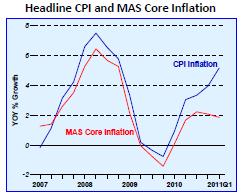 As seen from the graph above, the core measure is always lower than the CPI in the last few years. This is hardly surprising as housing and private transport, two of the chief culprits of higher prices in recent years, have been removed.

Over the longer term, this relationship no longer holds true. As seen from this 30-year chart, there are times where the MAS core inflation measure is actually lower than the CPI.

Many of us would probably be surprised to see that the average MAS core inflation measure over a 20-year period is actually higher than the CPI.

From the lower volatility and close tracking of CPI, I would find it hard to disagree that the MAS core inflation measure is a suitable parameter to be tracked by policymakers for the purpose of monetary policies changes.

However, for all of us mere mortals out here, I think we should be looking at the CPI as a measure of how inflation is affecting us (or eating us alive).

Housing is probably the biggest single item purchase all of us will ever make in our lifetime, and to ignore it in our definition of inflation just doesn’t feel quite right.

If you intend to save money to buy a property in 5-years time, wouldn’t you want to use a measure that factored in the change in property prices?

Also, an increase in property value would indirectly lead to an increase in money supply (for example, someone can draw on a credit facility based on his higher property equity value), which will ultimately lead to higher prices for all other items.

Facts and figures from this article have been extracted from the April 2011 edition of MAS economic review. Refer to page 33 for their write-up on the MAS core inflation measure.

Perhaps the decision to leave public housing and transport out of the equation is due to the fact that the primary tool for the MAS being currency strength is unable to have a strong impact on these sources of inflation compared to direct imports like food and oil.

Hmm..actually for housing and transport prices, they are heavily influenced by the policies of the ruling government. I guess at the end of the day, it is what they want to use the core inflation measure for.

If used as a gauge for MAS monetary policy – correct.
If it’s used as a (misleading) indicator of true inflation for the man in the street – wrong.

so is it wise to buy a property when inflation is high or low? (or is there some sort of comparison between the previous year you have to do before deciding? i’m a newbie at this. Thanks!) Thanks in advance!