Yesterday, I was at an event where Ashraf Laidi, chief market strategist of CMC markets, shared his insights on the market.

The session started at 8pm and lasted all the way till 11pm. If there were more questions from the audience, I think Ashraf could have gone on till the next morning as he always had lots of comments on every chart that he showed us.

Surprisingly, I saw that many people in the audience actually stayed right to the end. Perhaps some of them are regular currency traders who were used to the late nights. 🙂

Ashraf Laidi spent a lot of time analysing the movements of the EUR/USD currency pair, as well as its volatility chart.

Below is the monthly chart of EUR/USD. 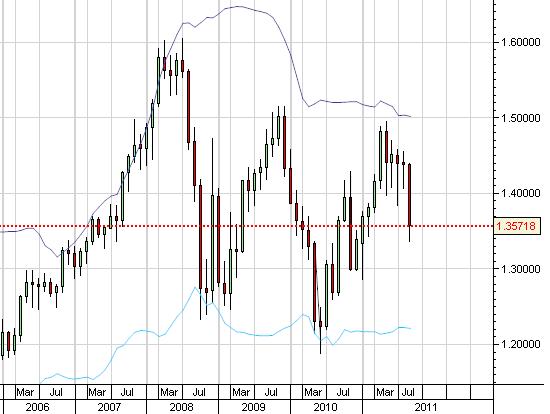 Ashraf was able to link the movements of this currency pair from 2006 to the interest rate movements of USD and EUR, and subsequently to the start and end of QE1 and QE2.

Generally, QE1 and QE2 were negative on the USD, and the end of quantitative easing also coincided with the subsequent strengthening of the US dollar.

Everything looked so logical on hindsight.

To cut a long story short, his current view on the Euro is quite pessimistic and Ashraf expects it to break below 1.30 by the end of the year, if not sooner.

You can have a meeting every few days but nothing is going to change the fact the Greece will have to default.

the S&P 500 movement last night just raised the probability of what he has said.