In one of the most stunning moves in its history, the Swiss National Bank (SNB) announced that it would buy euros in “unlimited quantities” whenever the single currency fell below 1.20 Swiss Francs (CHF).

The news took the market by surprise and sent the Euro spiraling up from 1.10 to 1.22 versus the Swiss Francs, an almost 10% increase, in less than fifteen minutes.

The appreciating CHF has been hurting Swiss exporters, and the central bank has responded with a drastic action. Recently, the CHF had continued to appreciate as the currency was traditionally viewed as a safe haven in volatile market conditions. 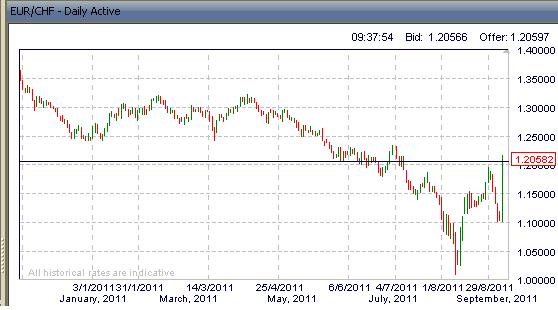 Can SNB keep to it’s promise of buying unlimited quantities of Euro?

The last time SNB tried to prevent the CHF from appreciating in 2010, it had to drop its position eventually as the currency continued to appreciate. It was left holding massive amounts of Euro and USD, which amounted to SFr 20bn of losses as the Euro and USD devalued.

In announcing an artificial floor for EUR/CHF, it has shown its hand and could prompt retaliatory action from other central banks, such as Japan.

If everybody wants to devalue their currency, which currency will be the one that gains?

There will be a currency war.

Ultimately, Gold might prove to be the most resilient.