An article that I recently read carried this headline “Soaring Land Prices ‘suicidal’ for Land Developers”.

The headline was attributed to Kwek Leng Beng, who said last year that our skyrocketing land prices and restrictive rules (e.g. all new homes must be sold within two years of construction) made buying residential land in Singapore “suicidal”. I cannot agree more.

First of all, margins have slipped to 10% or even as low as 5% as one insider recently told me. A 5% margin on a major residential project is insane. There is not much room to maneuver around costs and regulatory changes that might affect demand. To put that into perspective, the developer is only earning 10-20 times what the housing agent marketing the property is earning. 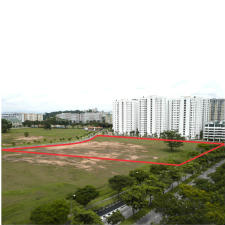 One of the reason for our increasing land prices is that government land is sold using an auction system. There is nothing wrong with auctioning off our state land to get the maximum revenue for the government. The problem arises when developers miscalculate their sums and over-bid for the land.

It becomes a cat and mouse game to secure land at all costs.

What we see more often nowadays is that the highest bidder wins the auction by a big margin from the second highest bidder. While this is good news for the seller (our government), downstream social costs might arise if the developer runs into financial trouble and is unable to complete the project. Buyers might also be left stranded.

High land prices also translate to high property prices and high rental, which increases the cost of living for the people. A high cost of doing business also makes us less competitive.

I have an idea to moderate this rising land costs. While this means that the government has to take in less revenue from land sales, I think that sacrificing some profits to control the rising cost of living is beneficial in the long run.

The Economist Intelligence Unit (EIU) has already ranked Singapore as the world’s most expensive city to live in 2014.

The idea is actually quite simple. Instead of selling the land to the highest bidder, the land is sold to the second highest bidder instead (or to the third highest). This changes the psychology of the whole bidder process altogether. It will be interesting to see how the bidding pattern changes if this system is used.

What do you think? Leave your comments below and let us know what you think.

Has HDB BTO Supply Been Overdone?

There is nothing to stop developers from submitting a second slightly lower bid via another shell company so that the lower bid wins.

Sounds like a good idea if the govt has set a meaningful minimum target price. Then the bidder will not bid below the target price, and yet not too high to be the top. The difference among the bids could be very very close.

There is a minimum price for land tenders.