My Visit to Berkshire Hathaway AGM

Over the weekend, I was at Omaha for the Berkshire Hathaway annual general meeting.

For those who are not familiar with Berkshire, this is the company that is run by the world’s most famous investor, Warren Buffett. The attendance for this event has been steadily increasing throughout the years and an estimated number of 40,000 attended this year’s meeting.

Unlike most AGMs that last only for a short duration, Berkshire’s AGM lasted for one complete day with other events taking place on other days to make it a series of events that shareholders could attend. 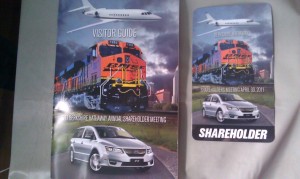 I was scheduled to arrive at Obama at Thursday night but due to a cancelled flight, I could only arrive there on Friday morning. Good thing that I had planned on arriving a day earlier. However, I could only sleep for a couple of hours on Thursday night and was completely exhausted due to jetlag on Friday afternoon.

The events started with a shareholders cocktail reception on Friday evening at Borsheims, a famous jewelry store owned by Berkshire.

A Berkshire AGM regular advised me that the cocktail reception would be extremely crowded and might not be so worthwhile attending, so I decided to skip that as I could barely keep my eyes open in the afternoon.

On Saturday itself, I arrived at the Qwest Center at around 6am to join the queue of early birds which was already building up quickly. The weather was extremely cold with a slight drizzle and we had to wait in less than ideal weather conditions until the doors opened at 7am.

Once the doors opened, everyone made a beehive for the best locations to reserve their seats. People were walking briskly and even running. I settled for a seat in the middle of the arena before going off to tour the exhibits.

The exhibition area was huge with many of Berkshire’s companies selling their wares at special discounts for shareholders. There wasn’t enough time for me to really shop around as I wanted to go back to the arena for the start of the AGM at 830am. While the exhibitors would be around for the rest of the day, it would not be possible to tour them if I wanted to listen to the entire AGM’s proceedings.

I managed to spot Warren Buffett in the exhibition area where he was completely surrounded by journalists and fans taking photographs.

Back in the arena, I was getting ready for the start of the 1-hr video presentation which was to kick-off the AGM. A Berkshire insider who was seated beside me told me that Warren Buffett would be watching the video from the seats right behind me (about 3m away). The seats were marked “Reserved for Clarke International”. 🙂

Couldn’t believe my luck as I managed to take a few photographs of myself with Warren Buffett as part of the backdrop. LOL.

The video was quite funny. There was a 15-min cartoon clip starring Warren Buffett and Arnold Schwarzenegger about a futuristic robot trader who was sent back in time to terminate Warren Buffett. The other clips were also not so serious but was meant to entertain us in typical Warren Buffett style.

At 930am, the Q&A session started. It lasted all the way to 12 noon and resumed at 1pm till 330pm. This would be followed by the formal proceedings which is the shortest part of the meeting. After that, attendees would have a little bit of time left to tour the exhibits before they close at 430pm.

I happened to meet up with Neil Jain, a fee-based financial consultant from Canada. He was helping AOL to provide some live coverage of the event. You can replay his session here:

I will write more on the Q&A and provide some photos in subsequent posts.

Right after the meeting, I rushed off to Elliott Aviation where NetJets, a Berkshire owned company that provides private jet services, was giving shareholders a tour of some of their private jets. The tour was from 12 noon from 5pm so it was basically a rush there if we wanted to see their planes. Well, this is probably the only time I get to sit in a private jet so I figured might as well go and have a look. They didn’t allow any photo taking though.

From 530pm till 8pm, there was a picnic for shareholders at Nebraska Furniture Mart (NFM). NFM was huge with a 77-acre campus selling all sorts of furniture and appliances.

The whole of Sunday was dedicated as Borsheims Shopping Day where only shareholders of Berkshire could visit the store. The discounts given was quite huge and the whole place was packed with many serious shoppers. Free brunch was also provided.

There was a former US chess champion who gave a blindfold chess exhibition, a couple of bridge expert as well as a magician there to provide some entertainment.

Warren Buffett made a short guest appearance after noon to try to sell some jewelry to the shoppers.

During my short time at Borsheims, I was talking to a sales attendant when she suddenly told me to wait a while as she needed to take some photographs. I was like “Huh??”. And then she said, “Of Bill Gates”. I turned around and saw Bill Gates walking swiftly past me with a few of his bodyguards.

A surprise encounter which marked the end of my first visit to Omaha.

I bought 1 share of BRK B, and wonder whether I could attend the AGM next year?

Sure, you can. You just need to submit proof in order to get the pass.

I see you still haven’t corrected “Obama” typo yet 🙂

haha..Thanks for pointing that out. Too much news on Obama when I was over there (due to killing of Osama).

Any minimum of shares required ? 1 also will do ? hehe

Amazing … i wonder if you need to own some shares of Berkshire to be invited ?

Yes, you need to own shares to apply for a pass.

Martin,
Amazing that you met Warren Buffett and Bill Gates.

You had a very interesting trip!

Were anything mentioned about Sokol and the shareholders’ lawsuit?

Yes, there was a long discussion on this but he managed to clear the air to the shareholder’s satisfaction.