Tiger Airways Holdings Limited announced a few days ago that it was proposing to undertake a renounceable rights issue to raise gross proceeds of approximately S$158.6 million.

The time and date of the Rights Issue will be determined by the directors of the Company and is subject to approval from shareholders.

I have never liked stocks of airline companies as many of them struggle to remain profitable. Even more so an airline which has received more than its fair share of complaints from its customers as far as I can remember.

Long term shareholders who invested into Tiger Airways during IPO and held on will not be too happy with its current price as well as the news of the rights issue. 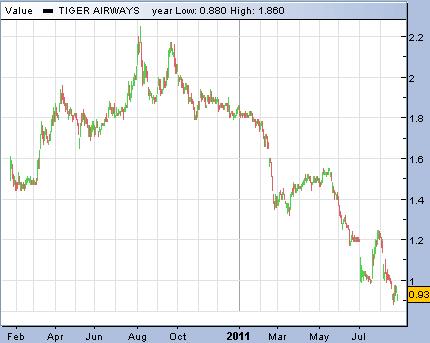 Incidentally, the current CEO of Tiger Mr Tony Davies, has resigned to take on a position in another company. Mr Chin Yau Seng will be taking over as the CEO with effect from 1st November 2011. Mr Chin is currently the Company’s Acting CEO and was formerly the CEO of Silk Air.

And yes, if you buy the rights, you have to pay to buy the rights shares within a specified time frame. Otherwise, becomes worthless.

On a side note, regarding K-Reits 17:20 rights issue, does it mean that there will be K-Reits 850? Why is the ratio so weird? Does this mean that only people who have exact multiples of 20 Lots will not end up with odd lots?

Sorry, I am a bit confused by the TigerAir R, TigerAir 500 and TigerAir R500. What are they? Are them the warrants? “You have a very short window of period to either sell the rights or subscribe (convert the rights to normal shares).” if i bought them and i didn’t convert them to normal shares does it mean it is worthless = making losses? For subscribe, we need to pay to the market price they offer?

If you had bought the rights (Tiger R or Tiger R500) but didn’t subscribe to the rights (ie convert them to the mother share by paying the rights price), they would have all expired worthless.

Recently, I have subscribed the right issue from Tiger airway before the deadline i was given.

You can sell them after they have been credited into your CDP. Just sell them under Tiger shares.

Hi Martin,
I am not sure about the warrants from tiger airways too, i am giving 4 option as below:
1) Exercise – fund debit
2) Lapse
3) Oversubcripstion
4) Sell rights.

Currently , i am holding 10000shares , and they issue me 5000 rights. My question is will the 5000 right convert to normal share which is $0.58 ? or i must sell the right within the period given if not it will “lapse” default option? please advise, thanks!

Unless the share of Tiger falls below $0.58, you should not consider the lapse option.

If you pay $0.58 per rights that you are given, they will convert to normal Tiger shares.

So the least you can do is to subscribe for the 5000 rights (ie buy Tiger at $0.58 per share), and sell 5000 of your current shares at the current market price to fund it (if you have no money).

Alternatively, you can sell the rights at $0.0x each, which should give you a similar or less return than the above.

If you feel that Tiger price will hold above $0.58, then over-subscription should also be considered.

Are you familiar with options/warrants? The rights that you are given function just like warrants.

The TigerAir R are the warrants, the price 0.053 that you see is approximately the price difference between the mother share price and the strike price ($0.58) of the warrants.

You have a very short window of period to either sell the rights or subscribe (convert the rights to normal shares).

Do you mean that if I do not want to subscribe to the rights I can sell my 2000 TigerAir R away?

Yes, that is correct. Just make sure you sell the correct counter (Tiger R and not Tiger) and correct quantity. Note also that the trading time for Tiger R is limited. You only have a short window of time to do it before it stops trading. Refer to the document they sent you for the timeline.

Wonder why TigerAir’s price is so low? Just 26cts above rights. If the share approaches 78.5cts again (today’s low), may as well buy the shares at 58cts. Any potential of this counter? By right, the price such be much higher correct?

don’t quite get you. What do you mean if the price approaches 78.5c, then it’s better to buy the shares at 58c?

What I mean’t was if mother share @78.5cts, x-right share price may hover around 58cts. Because @78.5cts, the rights value is only a few cts. Most people will sell the rights and avoid the hassle of subscribing. What is your take on TigerAir? Read somewhere the NTA is 40+cts. Even at 58cts or thereabout, is it still a good buy, assuming my x-right prediction materialise?

Personally, I don’t like airline shares. Much more so for Tiger, which is loss making.

Since ex-rights is on Tuesday, we will have to see what is the closing price on Monday to determine the ex-rights price.

Thanks for the quick response.

As I just bought the shares 2 days back, I don’t think I will receive the circular.

I learnt that Tiger Airways had mailed the circular to shareholders a week back informing them about the rights issue and also to attend the EGM on 19 Sep.

Does this mean that the rights issue have not been ‘technically’ approved yet subjected to voting?

Am I right to say that after the EGM, there will be a window period for shareholders to buy the rights through ATM? Therefore, I just need to wait for the official announcement and head down to ATM to purchase?

The EGM is to approve the rights issue. After that, they will send out the circular with the ex-rights date, closing date for subscription, etc.

Would all shareholders be entitled to the 2:1 rights issue? I bought a few lots at 0.90 today. Am I entitled? If so, when and how do I subscribe to the rights issues? Any idea?

as long as you hold the shares across the ex-rights date, you would be entitled to it. You will receive a circular with the instructions. Typically via ATM.

Is it wise to top up tiger share and get more rights issued. The price 0.93 is way below the IPO price of $1.50.Need advise.pls email ti [email protected]

The IPO price is kind of irrelevant. Whether you should buy more should depend on what you evaluate the company to be worth. Note that post rights, the share price will be lower than the current price in order to factor for share dilution.

If I read this correctly,

1) TH and SIA is determined to keep Tiger alive at all costs. Including pumping in large sum of monies thru right issues.

2) SIA is indirectly getting involved in the day to day operations of Tiger by appointing Mr Chin as the CEO. And at the same time indicating clearly that non-performance is equals to sacking (Tony Davis)

Tiger is probably good for a punt but the new shareholder must make sure he/she subscribes to the rights.

A few question to be answered though
1) Will Tiger continue to operate in Australia? Their business in Australia is not as profitable as they forcast. Leaving might help them focus on ASEAN which is a growing business in aviation travel.

2) How will the new long haul low cost airline affect Tiger in Singapore?

It pays to have rich parents. 😀

A bailout by SIA and TH no less. Personally, I don’t like Tiger. They have a lot to do to repair their brand.

Indeed. Its a bailout!

Wonder why do they want to keep this loss making airline alive?
Is it face, that SG cannot have something that fails?

At its current price, Tiger is trading at twice its book-value. And negative earnings.
Caveat emptor, buyers beware.